In order to continue its support to Sant’Egidio, EricAndo has decided to support a joint Christmas initiative.
EricAndo’s volunteers have prepared and distributed sixty Christmas bags for homeless people living in the Southern part of Rome.
The Christmas presents included gloves, a neck warmer, a flashlight, a Covid-19 kit (two masks and hygienizer), a typical Italian Christmas cake made by a local bakery hit by the economic crisis and a personal organizer realised by Cygnus, the organisation that EricAndo is supporting through a separate project. The gifts included in the Christmas bags were purchased through small enterprises requiring an extra financial support to fight against the virus.

In the neighbourhood of Portuense, located in the Southwestern area of Rome, there is the Pergolini-Giovannini bowling club: a gathering place where a group of vigorous gentlemen over the age of 55 decided from the very beginning that this place should have become a landmark for the neighbourhood, with historic social complexities and associated several challenges.
The members of the club cooperate with a shelter for separated families that hosts women who have experienced different forms of violence and their children. As real grandfathers, the members of the club help the families as they can: take the children to the beach; help with house chores; they always try to be there.
Inside the bowling club, the members have often organized food and clothes collections to support the most vulnerable residents of the area. But not everybody likes these initiatives and the centre has been vandalized several times. During the lockdown imposed by the pandemic it happened again.  These men are tired to fight on their own and need to make sure that the centre is open to the territory so that younger people can use it to support their community.
EricAndo has addressed their request and will organize a number of activities with the club as soon as the pandemic will allow. For the time being, EricAndo will contribute to install the video surveillance system that should prevent further actions against the establishment of an important centre in a socially complicated area.

Cygnus APS is an Associazione di Promozione Sociale (Association of Social Promotion, which is similar to a non-governmental organization, according to the Italian law)). It was established thanks to the participation and award of the call #PartecipAzione – IN AZIONE PER I RIFUGIATI (#Participation – In action for the refugees), funded and led jointly by UNHCR and Intersos.
Cygnus stems from the awareness of the dangerous and long journeys that refugee women are often forced to embark on with the hope of a better life.
Cygnus pursues civic, solidarity and social utility purposes and, specifically, it aims to provide refugee women that are particularly vulnerable with the means and the skill to increase their competences and to enable them to become professional in various socio-working fields and gain more economic independence.
The vision is to support the women to be integrated the social, economic and cultural Italian context and, at the same time, to promote the richness of their original culture and enhance their lives with sustainability.
In line with its statute and after consultations with EricAndo’s members and friends, EricAndo has decided to fund this APS with a purchase of products that will soon be available for sale.
The proceeds will be committed to further projects that will be identified in the coming months.

This is an intervention in response to the Covid 19 Emergency. Since its establishment, EricAndo has meant to look closely at the social dynamics in Italy, not only those in the developing countries. Therefore, during the difficult times Italy experienced when the first wave of Covid 19 hit the country, EricAndo supported the hospital Spallanzani in Rome with a donation that could contribute to very much needed research in relation to the pandemic.

On the occasion of Erica’s birthday, the 11th of May, EricAndo launched a fundraising initiative to support the shopping of essential items for families that were experiencing a financial hardship due to Covid. The fundraising initiative was available through contributions from the 11th to the 22nd of May and the proceeds went to three different entities, as follows:

During the spring of 2020, the association ‘Modavi Protezione Civile’ organized the gathering and distribution of food items to be given to the most needy families living in Rome, in the Municipio VIII. On the 31st of May, volunteers from EricAndo joined the initiative to provide food items in San Paolo, in the old bus station, where every weekend the Farmers Market takes place. The aim was to support needy families with the purchase of local products as Erica was very fond of organic and locally produced agriculture.

The Comunità Sant’Egidio is a historical institution, which supports the most vulnerable families in Rome and distributes food rations every Saturday in the whole territory of Rome. EricAndo provided financial support for the distribution that took place on the 25th of July 2020 in the Southern area of Rome called Garbatella. Volunteers from EricAndo distributed rations to the most vulnerable families living in the area.

Donation to the association Baobab Experience

Since 2015, the association ‘Baobab Experience’ supports migrants on the move that are temporarily in Rome before reaching a final destination in Italy or elsewhere. It provides them with legal and medical assistance and with three regular meals per day. During the pandemic, the needs of the migrants increased dramatically and EricAndo decided to provide them with financial support for the distribution of three meals per day. Volunteers from EricAndo distributed the meals on the 28th of July in Rome Tiburtina, which is a critical area in the city of Rome, where needs are substantial. 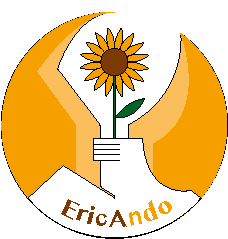